Damn i'm glad...Been a long week. Lets see if i can't kickstart this blog back to life a little bit. What have i been up to you ask? WORK. Shit gets crazy after the first of the year starts off, it's starting to level out a little now. Maybe i can get back to Motorsickle ways of life.

First off I've already got my eyes set on some things to hit up this year early.

April 27th I'm headed north to catch up with Jesse Law up in the DFW then headed to Davis Oklahoma for the Just Kickers party, should be a fun little 4 hour ride & weekend. Doc you in??? 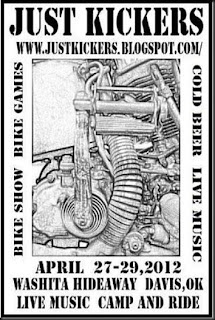 
And as bad as I hate to say it...Looks like for the 7th year in a row I'll be hittin the ROT rally up again. I said last year enough's enough. But....they reeled me in again this year with the announcement of NO FUCKING ATV'S 4-WHEELERS OR ANY Other bullshit allowed, and NO pulling trailers full of critters around running over people thats trying to ride around the drag to check out other parties going on around the grounds. It's still a bullshit money gubbing SUPER rally but maybe they ran off some of the fake mother fuckers with the no go carts allowed thing. OH, but this is what made me say...well shit.... I guess I'll have to go another year..... 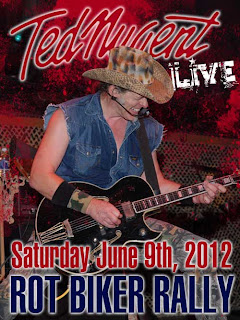 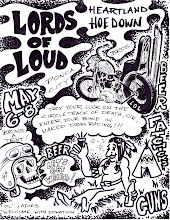